BANCO ALIMENTAR RECEIVES 18 TONNES OF HELP IN THE MADEIRA 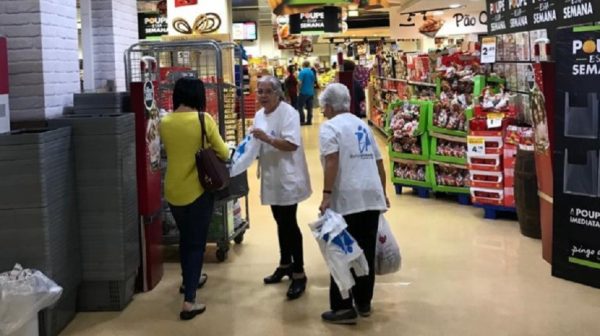 The food bank campaign of food collection this weekend had reached at 18.00 today 18 tons in the Autonomous Region of Madeira.
The amount is three tons higher than the last campaign (before the summer), but lower by one tonne than in December last year. The hours left until the last supermarket close allow us to hope that the value of 2018 will be exceeded.
The food solidarily delivered by Madeiran people over the last two days will be distributed by 53 institutions, benefiting around 8,000 to 9,000 people.
Today, the food collected was already being separated by product so that this week are sorted by expiry date and thus, in principle at the end of this week or beginning of the next, start to leave the first baskets.
In this operation, Banco Alimentar secured the support of 900 volunteers, 800 of whom were distributed by the 28 supermarkets adhering to the initiative (Pingo Doce, Continente and Super São Roque) and 100 remained in the warehouse, organizing the aids that were arriving.
Fátima Aveiro, president of the Food Bank in Madeira, explained to that this 12th bank campaign in the Region forced a large logistics company involving companies, schools and other institutions, in a number above fifty.
“It’s not an easy task,” she said, because people are involved in a variety of activities, so reaching the 900 volunteers “was a lot of work and a lot of involvement.”
Fátima Aveiro also spoke about the need for people to trust institutions such as the Food Bank. “We know there are some less abonnory cases, but unfortunately we still have people who do not know how to value all this work, but it will not be for those that we will lower our arms, on the contrary,” he said.